Well, you read a little about me on the home page here, so I will use this section to provide some more in-depth color and information about where I came from, who I am, and what will be. Sort of philosophical, I guess.

I was born in Lancaster, Ohio, on Feb. 8, 1820. My father, Charles Robert Sherman, was a successful lawyer who sat on the Ohio Supreme Court and died in 1829. I was then sent to live with family friend and neighbor Thomas Ewing. I entered West Point at the age of 16, and four years later, graduated sixth in my class. During the Civil War, I led a Union Army through the South, laid waste to everything in my path and burned Atlanta.

Oh wait, I got myself confused with Union General William Tecumseh Sherman! Let’s try this again.

I was born Feb. 18, 1968, at St. Francis X. Cabrini Hospital in Seattle, Washington. On that same day, somewhere in California, the actress Molly Ringwald was also born. Half my family background is from the state of Washington and the other half hails from the town of Sparta, N.C., in the Blue Ridge Mountains. Sadly, neither side of my family thought to invest in either the timber or tobacco industries way back in the day and, as such, trust funds have never been in the Crum family retirement plans. 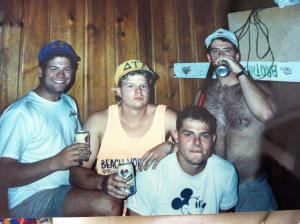 I grew up in Puyallup, Wash. (Near Seattle. And unless you are from the area, don’t try to say it.). I am a die-hard Seattle Mariners fan and I blame myself for causing my Beloved Mariners to lose the 2000 ALCS. I attended Washington State University in Pullman, Washington, and in spite of having way too much fun as a member of the Delta Tau Delta fraternity, and a D+ in Criminal Justice 101 notwithstanding, I managed to graduate with bachelor degrees in communications and history. I’m still somewhat convinced that someone at Wazzu lost their job over approving my diploma.

My career path took me on the following route:

–A return to my college-summertime job of throwing pallets at a grocery warehouse for $6.75 an hour.

–Three years in Hirakata, Osaka, Japan where I taught English, wrote for an English-magazine and did English-language newscasting at a gigantic radio station. I have to say that last gig was the easiest $50 an hour I ever made.

Tuesday, Nov. 3, 1992. Election Day in the U.S. And a freshly scrubbed me took the day off from work to meet Ken Griffey Jr. at Koshien Stadium near Osaka, Japan.

–Four years in Boston, where I earned a master’s degree in journalism from Northeastern University, worked as a newscaster for the Christian Science Monitor’s version of NPR (until it closed), and then began my career covering technology for the Boston Business Journal.

–A cross-country drive to California, where I did a short stint at Investor’s Business Daily, a medium stint at Upside, one of those early-00s “new economy” news organizations that now don’t exist and, finally, my ongoing stint at MarketWatch.

The Crum Clan: Lily, Marvelous Megan, Madeline showing off her personality, myself trying to hold it all together.

I currently reside in of Oakland, Calif. with my wife of more than six years, Megan (aka, The Thoroughly Awesome Ms. Crums), and my daughters, Madeline (Maddo), who is 4, and Lily (Little Sis), who is 2. I live in fear of when my girls both hit junior high around the same time.

In my spare time, I write travel stories and I have been to, lived in and drank beers in 14 different countries.

I love the music of Rush, the movie “Apocalypse Now” and rare ribeye steaks. I hate littering, being late and anyone who makes more money than me, aside from Seattle Mariners pitcher Felix Hernandez.

You can email me at rexpresto@yahoo.com.